The scoop on ice cream guilt-it's real, and it's a problem

Ice cream should be a permanent fixture in everyone’s freezer not just because it creates balance in the world, but because it prevents late night panic attacks caused by its abs 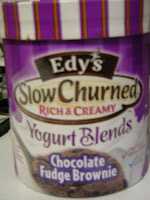 ence. Getting to the point of ice cream acceptance (ICA) is difficult, but in time can be achieved. The problems that most people face when browsing the ice cream aisle are that “I don’t need it; it’s too fattening; I’m lactose intolerant.” I say to these people, whatever, whatever, and get some Lactaid. It’s good for you. But what about the guilt, you say? I say, buy some stock in Edy’s and don’t eat the whole carton all at once. Edy’s brand Slow Churned “rich and creamy” flavors are lower in calories and fat than many others, and if you really want to feel good about it, get the yogurt blends. I recommend the Chocolate Fudge Brownie, which tastes exceptionally bad for you, but has only 120 calories per half cup, 30 from fat. Maybe not as good for you, calorically speaking, is the Rocky Road, sporting real marshmallows, not that marshmallow fluff crap people tend to think is acceptable as a substitute. Just say no to ice cream guilt.

When there are children in the ice cream aisle who want popsicles but their parents won’t buy them any, is it ok to laugh at them because we’re adults and can buy all the damn treats we want?
You betcha, and have a chuckle for me too.

I have some Cool Whip in the freezer. Is it now considered ice cream?
Yes, yes it is. Treat it with the same respect

When I buy a pint of ice cream I want to eat it all at once. Any suggestions on how to gain some self-discipline?
Personally, I have found success with the Multiple Spoons Method (MSM). Whenever you walk by the freezer and need a little nip, get a spoon out, have a few bites and put the spoon in the sink. Don’t wash it, whatever you do. Eventually you will run out of spoons and have to stop.
Posted by Drinkapotamus at 1:52 PM