Does this ranch make me look fat?

Back when my body actually metabolized what I ate, I used to consider ranch dressing its own food group. It was good on everything, homemade potato chips, pizza, burgers --oh, and salad too. Then as I started eating healthier and consuming more salad, I realized that putting half a gallon of ranch on a cup of lettuce and veggies was not so healthy after all. For a while I tried vinaigrettes (no can have creamy?), then “lite” (yech!) dressings, and finally found a stand-in that was soy based and called itself a cucumber “ranch.” Times were hard.

And then one day while wandering past the produce in Wegman’s I saw it: a yogurt-based salad dressing by a company called Bolthouse Farms. I checked out the back, prepared to be disappointed. The upshot: Move over vinaigrette, the ranch is comin’ back home. Check it out for yourself: 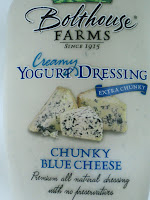 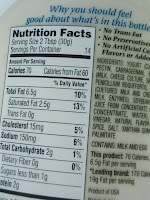 Sample of Nutritional Information:
Ken’s Steakhouse Blue Cheese Dressing--Serving size 2tbsp – 150 cal/ 140fat cal
Wishbone Chunky Blue Cheese Dressing-- Serving size 2tbsp – 150 cal/ 140fat cal
Bolthouse Farms Chunky Blue Cheese--Serving size 2tbsp – 70 cal/ 60 fat cal
Besides the ranch I’ve also tried the blue cheese, which is especially tasty on hot wings and pizza, and the Caesar dressing. They also make a ceamy honey mustard and a Thousand Island dressing, which I suspect will be good on a Reuben sometime in the near future. If you read a lot of labels you might also notice that the calories are just slightly worse for you than a “lite” creamy dressing. And if you have any taste buds at all, you know exactly what these low fat dressing tastes like (hint: starts with an S). You'll also find that the yogurt provides an extra little kick, and I typically don’t even use the whole recommended serving size of two tablespoons—even better. So thank you, wonderful people at Bolthouse—you have brought light back into my dark world.
Posted by Drinkapotamus at 11:59 AM

Email ThisBlogThis!Share to TwitterShare to FacebookShare to Pinterest
Labels: Good For You, Product Review