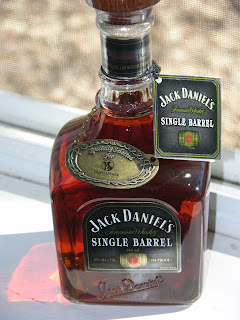 In an effort to reduce the bulk of our move, Beta Wife and I have been frantically trying to finish what’s left in our liquor cabinet (a task we will not manage to complete and still retain full function of our livers.) We polished off the rest of our rye whiskey selection, which wasn’t very impressive to begin with. I had forgotten why the bottle of Sazerac Rye had been pushed to the back of the cabinet for so long, which must be why I’ve purchased it twice now. It’s grassy. Yep, like a big mouth full of weeds and hay.
The rum was no problem, considering our Frozen Vacation binge last week. Still remaining is half a bottle of Jack Daniels Single Barrel whiskey that will most likely be travelling with us, just because I don’t want to rush through it. If you’re a whiskey snob like yours truly, you probably wouldn’t give JD a second look, but after sampling it at a tasting, I was pleasantly surprised.
For the last couple of years, the Jack Daniels Distillery has been offering the sale of single barrels for “personal ownership.”
So this barrel was selected and purchased by my local liquor store, and labeled especially for them. Inside is Tennessee whiskey that has been charcoal filtered and aged in a charred white oak; the resulting whiskey is quite similar in taste to bourbon. It’s dark amber in color, bold but not quite spicy, and perfect with a cigar. The best part is that anyone with a spare eight or nine thousand dollars can have his/her very own barrel of whiskey, just for them. Can you just picture how beautiful that giant, empty oak barrel would look in your living room? Next week is my birthday…I’m just sayin’.
Posted by Drinkapotamus at 2:07 PM