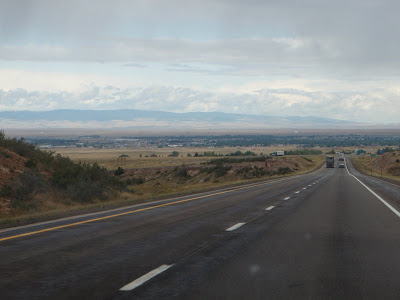 Ok, maybe just road trip. No exclamation. In fact if there was any sort of anti-climactic punctuation available I would use it here. Wanting to go on a road trip, I’ve finally realized, is a lot like wanting to go to a street or music festival. It sounds like it’s going to be a lot of fun, but almost as soon as it starts, I want to go home. Right away. We did in fact make it to CA from NY without incident, even with two angry, screaming cats. (Btw, there is a $1000 fine for abandoning animals in CA, so I’d advise that you do it before you cross the state line.) Though I was not feeling terribly adventurous, I did manage to find a couple of fun places to stop and eat on the way, thanks to our trusty GPS system, who I’ve affectionately named Gladys.

White Castle, somewhere in IL—White Castles are maybe one of the most perfect foods known to humankind. It is more than a little vexing that you can only get them in a very limited part of the country, and perhaps my least favorite part, the Midwest. I had intentions of buying a crave case, but unfortunately they only come in units of 30, and with no fridge in our classy Motel 6, I had to settle for only 20, which Beta Wife and I polished off without effort. They now have all kinds of different burgers, like jalapeno, and the newest one, the A1 burger. I find these appalling. The only item you should be buying at White Castle is an original burger, with cheese of course. I don’t even see why people get fries—that’s just less room for cheeseburgers. 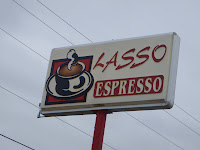 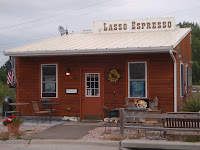 Lasso Espresso, Gothenburg, NE, Exit 211 off of I-80—We stopped to get gas in Nebraska and right next to the station was a little drive-through coffee place called Lasso Espresso. I did not even want coffee, but I had to stop and get a drink at some place called Lasso Espresso. Just look at that fantastic sign. My “safe bet” approach at a new coffee place is to get an au lait, so if the coffee is bitter it has a milk buffer, and I can see if the baristas know how to steam milk, so I can decide if I’ll let them make me a cappuccino in the future. The coffee was very good and the milk was spot on—it didn’t need any sugar. My favorite new discovery: a sticky little plastic thing that goes on the mouth of the travel lid to keep the coffee from splashing out. Mine was a festive, angry little pumpkin. I used it all week.

Aunt Alice’s Kitchen, Longmont, CO—We made a detour to Colorado to see a friend and she took us to breakfast at this diner-style restaurant. They are a country cookin’ and homestyle comfort food place, and seem to be packed for breakfast even on weekdays. The food is pretty cheap and you get a lot of it. I ordered the country fried steak (topped with sausage gravy) that came with two eggs and hashbrowns, as well as a “bread option.” Almost as if it were created just for me, “two small pancakes” are available if you don’t want toast. Well, lemme tell ya, they weren’t small. They were “medium to normal” sized pancakes with a giant mound of butter the size of a small animal melting on top. I would like to rent a space in their kitchen and never leave. (But I would not recommend the coffee.) 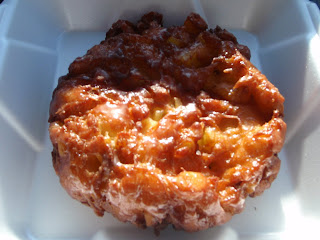 Actual size: much bigger than you think.

Montego Bay Casino (secret donut shop), Wendover, NV (on the state line)—I am unashamed to say that we were initially looking for a Starbucks, because dammit, I just needed a big cup of halfway decent coffee. To meet our road trip needs, we relied heavily on Gladys (our GPS gadget), who I’ve discovered I cannot live without, even though sometimes she just doesn’t know what in the hell is going on. Infallible Gladys informed us that there was in fact a Starbucks in the Montego Bay Casino—instead we found a sort of dingy little station with an ancient espresso machine that looked like it had seen better days. But no matter, because in the cases in front of us were donuts, lots of perfect donuts. Some were covered in chocolate, some were sprinkled with coconut, some were cinnamon swirls; all of them were huge. We got an apple fritter—the best ever, and I got to play the quarter slots too.

Whole Foods, Park City, UT—Just before you hit Salt Lake City after hours of driving without radio stations, there is a strange little oasis called Redstone Center that has shopping, restaurants, and little urban condos, all of which just seemed to have popped up out of the ground. We stopped to eat at Panda Express, but turns out it’s right next to a Whole Foods (never been so glad to see one), and Beta Wife suggested we get a salad instead of eggrolls. It was a good place to take a break from road food, and not as scary as stopping in Salt Lake.

Where we didn’t go— Back to Gladys…she tells you where to find gas, coffee, and the nearest restaurants on your route. However, sometimes you can be led astray since the information usually does not come with any sort of description. We took the exit to Sparks, NV because I found a place called Wienerschnitzel and was hoping for some German fare, perhaps even some of the aforementioned fried pork goodness (I am foolishly optimistic). This place did not serve German anything—they are apparently some sort of hot dog serving fast food place. The building looked like it hadn’t been renovated since the 1970’s. It looked frightening even to me, and I’ll eat just about anything. This brings me to my next stop… 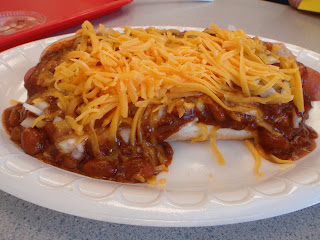 Sinbad’s Hotdogs, Sparks, NV—Located right behind Wienerschnitzel in a very charming strip mall is a little place called Sinbad’s. It’s not really a chain (though they seem to be looking for people to franchise them) and the people that work the counter are very friendly. Their menu is simple—they serve hotdogs with various wonderful hotdog toppings such as sauerkraut, chili, and nacho cheese. I got a chili cheese dog that filled the entire plate. It had two scoops of chili, onions, and lots of cheddar cheese. It required a knife and fork, and it was beautiful. According to their website they started in San Leandro, CA and later relocated to Reno—right now they only have these two locations, so if you’re driving out that way, it’s definitely worth a stop. 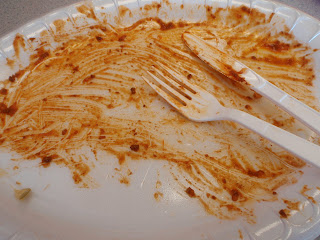 End of the road.

Posted by Drinkapotamus at 7:07 PM