What to Drink Now 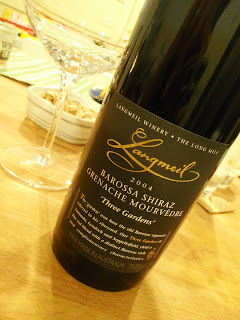 Langmeil, “Three Gardens”, Shiraz, Grenache Noir, Mourvèdre, 2004—I first had this wine at Just a Taste in Ithaca, NY and had a slight obsession with it for a few months. I just finished the last bottle (you usually have to order it), which held up surprisingly well on the 3000 mile car ride we subjected it to. I recommend a big oversized wine globe for drinking so you can really get the nose. It produces a fabulous aroma, but don’t get so caught up in the smell that you forget to drink it too. $18

Francis Coppola Diamond Collection, Zinfandel, 2006 – this CA Zinfandel is very fruity in a black-currants-and-cherry-jam kind of way. It would pair well with a nice big steak or some tangy blue cheese…or steak with blue cheese. $13 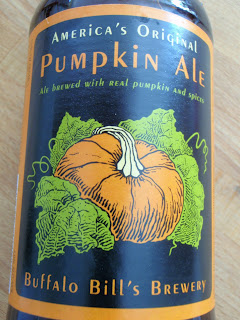 America's Original Pumpkin Ale, Buffalo Bill's Brewery
Every year I like to try a new pumpkin beer, because I’m just festive like that. Most of the time they’re disappointing, either lacking character or just too heavy on the spices and “flavoring.” This year I was pleased with the pumpkin ale from Buffalo Bill’s Brewery in Hayward, CA. It’s a sturdy ale with strong hints of clove and a little pumpkin in the aftertaste. It’s one of those beers you may not like right at the first sip, but it grows on you—give it time.
Posted by Drinkapotamus at 12:12 PM