"Fast Food" that's good for you...well at least it's not that bad 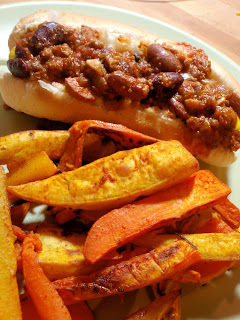 There’s a place in Berkeley called Amanda’s that works the “healthy” fast food angle. They have a simple clean space, with large open tables, and they sell (mostly organic) burgers, fries, salads, and house made sodas. I love the idea of a healthier version of some of my favorite, fat-laden take-out indulgences, because really, who doesn’t love a double cheeseburger and fries from the dollar menu at you-know-where. My only complaint is that I think Amanda’s could take their idea farther—once you get past a few items on the menu, really, it gets a little boring. My favorite was the cheeseburger, topped with a sauce not unlike what you might find on a Big Mac; but those fries…such a disappointment.

So, of course, the new challenge was to make healthy “fast food” at home—something so good that I would crave it for days. My particular weakness for hotdogs made the base of the meal an easy choice, but the main attraction would be the fries. I cooked up a batch of sweet potato fries that were both spicy and sweet, and them finished off with a tangy sour cream dipping sauce. Oh, and they’re good for you too. Get ready for 500% of your daily vitamin A intake.

3 large sweet potatoes (I used two different types, for more texture and flavor)
1 Tbsp sugar
2-3 tsp kosher salt
2 tsp chili powder
1 tsp cayenne pepper
¼ tsp black pepper
Canola or vegetable oil spray
1. Preheat oven to 500°. Make dipping sauce (recipe below.)
2. Peel sweet potatoes, and cut into thick slices or wedges.
3. Place potatoes in a large bowl with plenty of extra room, then spray with canola oil with the intention of coating all the little wedges.
4. Mix sugar through black pepper in a small bowl.
5. Toss mixture with potatoes until well coated.
6. Spray a baking pan with the cooking oil and place the fries in a single layer on the pan. Bake for about 10-12 minutes, then flip the fries, and bake for 10 more. 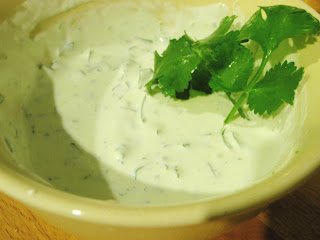 1. Combine first 3 ingredients and mix until smooth.
2. Add chopped cilantro and salt, then chill for about 30 minutes.

I used Hebrew National hotdogs because they have the best flavor and they’re not a totally sketchy meat product. Of course that’s coming from someone who occasionally enjoys a piece spam or some canned corned beef hash, so really, who am I to have processed meat standards. Anyway, in addition to their regular tasty franks, Hebrew now makes a reduced fat and 97% fat free version. Now, typically I would say, a fat free hot dog, WTF? But Beta Wife demanded that we at least give the reduced fat dogs a try, and as is sometimes the case, she happened to be right. I can’t tell the difference between the regular and reduced fat version. (I can’t speak for the 97% hotdog, and I hope it stays that way.)

I topped the hotdogs with leftover veggie chili and served them up with the sweet potato fries. Leftover coleslaw makes a darn good topping for them as well. I only wish I had them both leftover at the same time. And for extra calorie savings, don’t get those thick, heavy hotdog buns. They have almost twice the calories of a normal bun—remember the bread is just a vehicle for the hotdog.
Posted by Drinkapotamus at 2:00 PM