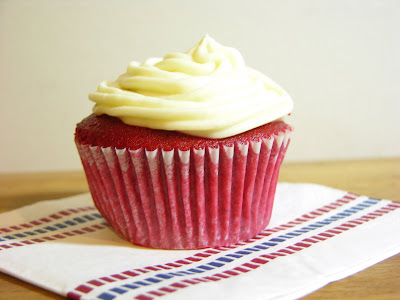 It seems that lately red velvet cake is showing up on a lot of food blogs I’ve been coming across, mainly in the form of cupcakes, but also sometimes in the form of cookies (possible purist debate waiting to take place). Having a terrible weakness for cupcakes, and being a displaced Southerner with an innate affinity for red food coloring, I finally broke down and demanded that Beta Wife make some for me. “Wife,” I said, “get in the kitchen and make me some cupcakes.”

If anyone can make red velvet cake, it’s a sweet tea drinkin’ Southerner. Though I call Chapel Hill, NC my hometown, it’s mostly because that’s the place where I’ve lived the longest. My family, however, has no Southern traditions, unless you count eating grits at the Waffle House. Beta Wife on the other hand, is a born and raised North Carolinian, who can use her southern drawl to charm the pants off a snake. On a phone call to the Beta mother unit in NC, BW asked for the “family recipe,” and was directed to Southern Living; it’s the go-to reference for irresistible "country" cooking. Two bottles of red food coloring later, I was presented with a batch of cupcakes topped with cream cheese frosting. After a few drinks, and a few cupcakes in place of dinner, I couldn’t help but feeling a little, uh…red. That’s the only way I can describe this particular cupcake overdose. I can’t remember how many I ate, but I can tell you it was way too many. Of course that didn’t stop me from having one for breakfast this morning. I still a feel a little red from that one, too. 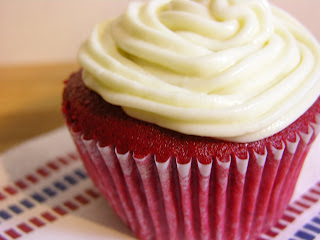 For the baker in your house, this red velvet recipe can be found here: Southern Living, November 1996.

The Wife’s super creamy, cream cheese frosting recipe is below, and I highly recommend it.
Cream Cheese Frosting

*Neufchâtel (American style) makes a tangy, and slightly healthier substitution for cream cheese. It’s good on bagels too.
Posted by Drinkapotamus at 11:44 PM