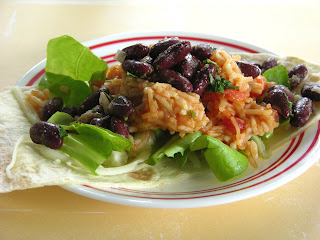 wrapping the burrito...fails
Beta Wife had to go out of town unexpectedly for a few days—a whole week actually—leaving me to forage in the wilderness of our kitchen until Sunday. There’s a running joke we have that whenever she travels, the animals are fine, but I need regular feeding and watering. For the most part this means I have been known to revert back to bachelor eating habits and cannot be trusted to make sound nutritional decisions.

So maybe it will come as no surprise to some when I say I am fully prepared to finish out the rest of the week eating meals inspired by a giant bag of flour tortillas. This is not to say I don’t have any exciting ideas for cooking with this week’s CSA box; it’s just that when the wife leaves, I get a little bit lazy. Uhm, lazier than usual, that is. So here are some effortless recipes for the lone diner.

Quesadillas with Greens and “Lazy” Salsa

salsa verde (recipe below)
2 large flour tortillas
¼ cup grated cheddar cheese
¼ cup Cotija cheese, crumbled
1 cup misc. greens (I used chard and spinach)
vegetable oil
1. Sauté greens in a tsp of olive oil, adding the tougher greens first for longer cooking time. For example, chard or kale would cook longer, spinach need only be wilted.
2. Heat a large nonstick skillet on low, coating with a little cooking oil or butter. Put on tortilla in the pan, spinning it in the skillet a few times to spread the oil. Top with cheese
and sautéed greens and heat on very low heat until bottom is crisp and cheese is melted.
3. Coat second tortilla with oil and place on top, flip over, and cook until crisp.
4. Cut into four pieces and serve with sour cream and salsa.

But hey, wait a minute. This is a bachelor meal. You don’t even need to put those greens in there if you don’t want to. You can just eat a big honkin’ pile of greasy, cheese-filled tortilla if you want. While playing video games. In your underwear.

Named for the lack of effort—pre-made salsa with a few improvements.


So after last night’s meal I realized I still had a ways to go with the leftover tortillas and salsa. After taking stock of dry goods in the pantry I found a box of Rice-a-Roni Spanish rice mix and a can of beans.

1 large tortilla
handful of lettuce, chopped
salsa verde
sour cream
sprinkling of cheese (I used Monterey jack)
1. Cook rice according to directions. Add tomatoes half way through cooking.
2. Put a little olive oil on a small pot, and heat the onion for about minute. Then add beans, cumin, garlic powder, and oregano. Cook on medium low heat until beans are warm. Remove from heat and stir in cilantro and green onion.
3. Warm up the tortilla in the microwave or a skillet. Add the all the fixin’s, then put in a scoop of beans and one of rice.
4. Fold it up. Or don’t, and eat it like a giant messy taco. Let the salsa run down your chin. You can do whatever you want, no one’s watching.

I won’t tell you what I’m having for breakfast tomorrow, but it rhymes with huevos.
Posted by Drinkapotamus at 9:08 PM