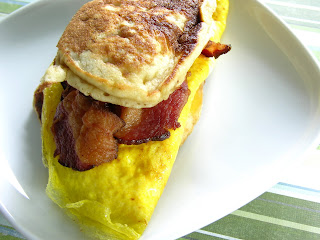 This morning I found myself in the company of some pancakes left over from Sunday’s brunch. Just two lonely pancakes with no plans. Now, I may have mentioned before that one of my guilty pleasures is the McGriddle from that-which-shall-not-be-named. Its tasty, cheesy, hot, melty, bad-for-you deliciousness makes my mouth water. So it didn’t take me long to figure out what to do with those pancakes. Ten minutes later I had a homemade McGriddle-style breakfast sammy, a perfect combination of sweet and salty. For those of you who don’t like your food to mix…look away.
Pancake Sandwich

2 pancakes
2 slices bacon
1 egg, beaten
1 slice cheddar cheese
1 Tbsp maple syrup
salt and pepper
1. Cook the bacon in a small omelets pan until crisp, drain most of the grease, return pan to heat and cook egg omelets style, adding cheese to the center, and folding in half.
2. Layer one pancake with mini cheese omelet, bacon, salt and pepper.
3. Pour over maple syrup and top with the other pancake.
Posted by Drinkapotamus at 8:31 PM