Today in Emeryville it’s one of those special trash pick-up days where you can put out as much junk as you want and the trash people will take it. The sidewalks yesterday and this morning were covered with people’s odd-sized, random crap that looks like someone had a yard sale ten years ago and abandoned it. Dining room chairs and couches, wet suits and typewriters - all of this stuff not found to be a treasure by someone passing by will head off to the landfill. And that’s a lot of trash.

I have a pretty good idea of what constitutes “a lot of trash,” because back in the day I used to help clean up the UNC football stadium after games on Sunday. It was how my ROTC unit made money for activities throughout the year. Normally this was just a moderately disgusting task, but when things really got hairy was when it rained the night before or during cleanup. Nothing like scooping up a few thousand pounds of soggy, wet, stinking refuse. Which is why I especially feel bad for the trash guys today, who are hauling away people’s unwanted, already somewhat nastified stuff, in the rain. And yes, there is a point to all of this…I’m getting there, don’t rush me. The point is, people, don’t make so much trash! 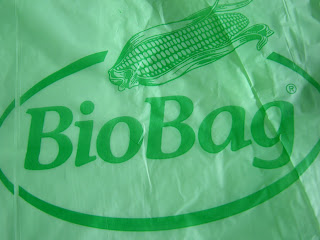 Admittedly this is not easy for everyone. I’m fortunate enough to live in an area where composting is just a part of everyday life. You put your yard waste and food scraps and anything else that can be broken down (dirty newspaper, napkins, etc) in the big green bin and the rest is taken care of for you. In fact, the resulting compost in SF and the East Bay is highly sought after “black gold” for gardens when spring rolls around. However, if you don’t have a local composting program and you do have some yard space, trying doing a little home composting. Your egg shells and grass clippings never need to see the trash bin.

Don’t forget that commercially processed compost can handle a lot of different items, such as cups and straws made from corn, pizza boxes, and bone. To make things easy we have a trashcan, a compost bin lined with a bio-degradable trash bag, and a recycling bin. It’s rare that we have more than one bag of trash in 10 days.

-Use Tupperware Instead of Ziploc-

I love a Ziploc baggy, especially the seasonal ones. And the ones with Spiderman. But I try not to use them if I can use something in their place. It’s easy to throw some chips in a bag to take to lunch or wrap up leftover onion in plastic wrap. But after investing in a nice set of Tupperware, I’ve found pretty much everything can just go in there instead. I’ve even started marinating meats and veggies in there. Of course I still use those little bags, but I just try to use them less, and extend their life. Occasionally I’ll wash them out for reuse, or have a few gallon bags designated to hold freezer items. Saves you some coin too in the long run.

A few years ago, the Beta Wife and I realized we had a problem—we would go to the grocery store with our dinner plans stored in our head and end up with far too many leftovers for the week. On top of the failure of the mental menu were the items we picked up on impulse. Next thing you know, you’re pulling out mysterious containers of moldy food, and throwing out spoiled veggies and forgotten bits of cheese. Then comes the guilt over the waste, and yet despite good intentions, the cycle continued. But we’ve reformed our wasteful ways when we started planning weekly menus. On paper this time. We’d page through recipes in magazines, account for how many days we’d be eating off of the dishes we made, and then wrote a grocery list.

We also stopped shopping so far in advance for perishable items. I think it’s a good idea to pick up groceries for no more than three meals at a time, especially if you’re buying meat. Then you can leave room for “I don’t have time to cook tonight lets go out”, or, “that meal made more leftovers than I thought, is that beef turning a funny color?” And then there is my personal favorite, “we just drank a whole bottle of wine on an empty stomach, can we order pizza?” You’ll save money on food by wasting less, and cut down on the amount of stuff you have to toss out.
Cooking Light Magazine makes for a great weekday meal resource, and picking up a whiteboard to stick on the fridge is an excellent way to keep up with your weekly menu.

Posted by Drinkapotamus at 4:30 PM

Email ThisBlogThis!Share to TwitterShare to FacebookShare to Pinterest
Labels: Environment, Much Needed Advice