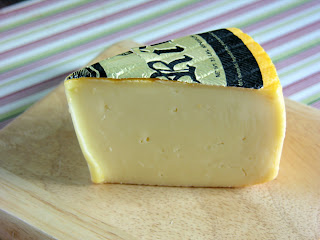 Here's a cheese that will get you in the Oktoberfest spirit: Norwegian Ridder. Though clearly not German, it's a cheese you might serve in Stinky Beer Cheese 101 -- something to get the palate warmed up. The reason I'm so excited about this cheese, the reason that I have decided it's my new favorite cheese in the world, is that it's exactly what I want when I have a hankering for some pungent cheese to accompany a big krug of German beer. Unwrap the cheese and take a big sniff--you'll know exactly what I mean. Cheese wimps might be put off at first and think, "you should get "ridder" that cheese." (I've been waiting a long to time to use that pun....) The flavor however, proves to be a bit more subtle. The Ridder stands up to IPAs, yet it's also mild enough to accompany a white wine like a Riesling. For the past two months I've gone to Berkeley Bowl every week, sometimes twice a week, and plowed through the maddening Berkeley crowds to get my paws on a piece. It's certainly worth the effort. You'll want to serve this at your Oktoberfest get-together instead of Limburger this year. Stay tuned for more Oktoberfest treats....

1-snooze
2-mild, but not boring
3-has a flavor
4-hints of stinky
5-now we're talking
6-next stop, stankville
Posted by Drinkapotamus at 10:30 PM

Email ThisBlogThis!Share to TwitterShare to FacebookShare to Pinterest
Labels: Cheese