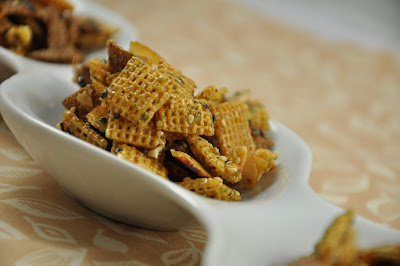 Now back to this recipe. Around the holidays, our friend Chris gave us a bag of this crunchy snack stuff (in one of those cute little X-mas bags) and said something dismissive, like, oh it's nothing much. Two days later the bag was empty. I think I broke out in a cold sweat first. Must. Have. More. That's when Chris made his move, “oh you want the recipe, that'll be...a million dollars.” He laughed an evil laugh. If we wanted the goods, we'd have to put up the cash.

Okay, I made that last part up for dramatic effect. He actually just gave the recipe to us and said that he was glad we liked it. The recipe, which we changed just slightly due to the fact that I didn't know Crispex and Chex mix were different things and I just generally have a habit of not being able to follow directions, is below. Thanks to Yamaoka for parting with his mom's awesome recipe.

Note: Chris says: “Senbei is Japanese for . . . probably something like rice cracker mix” and “also,these non-conventional measurements are my mom's, so I really can't tell you what the difference between 'heaping' and 'very heaping' is, but somehow I think you'll work it out.”

Let cool for at least an hour or two before serving. Cool = crunchy. For a more savory mix, use a little less sugar and a bit more soy sauce.

**Furikake is basically an all purpose seasoning used in Japanese cooking, often as an addition to rice. This particular kind contains salt, sesame seeds, and tiny little seaweed flakes. It is surprisingly tasty, considering I'm not a seaweed fan (or a fan of seaweed). 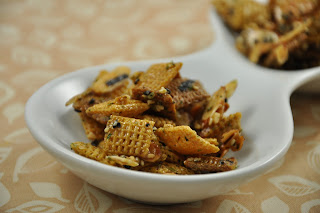 Posted by Drinkapotamus at 7:11 PM