How To: Select, Clean, and Cook Fresh Brussels Sprouts 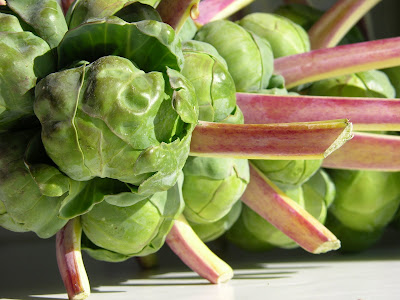 The Brussels sprout gets a bad rap. Even more than broccoli, Brussels sprouts are the dreaded veggie that children everywhere are purported to fear. And though I don't ever remember tasting them until just a few years ago, I think there are some unfair assumptions that I harbored without ever having tried them. One of those being that this veggie is a particularly bitter one—which is probably true if you've purchased them in a bag in the freezer aisle. Another is that they have a strong, even offensive taste. I supposed this is also true for undeveloped taste buds, which I'm sure is the reason most kids avoid them. They are also particularly vulnerable to the abuse that results when paired with the wrong seasonings or overcooked... But let's start with a clean slate. Just think of them like tiny little cabbages—and follow my advice. 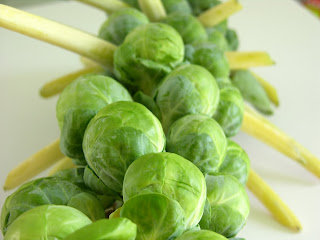 Buying and Selecting: Brussels sprouts are a cold season vegetable, so you'll find them in stores late fall or

early winter. Their flavor actually improves with frost and the vegetable gets sweeter. So if you see them in the summer, leave them be.

If possible, buy Brussels sprouts on the stalk. You'll find that they're better tasting, sturdier, and often appear healthier than the loose ones. In addition, buying them on the stalk is significantly cheaper, with some stalks holding several pounds of Brussels sprouts. When buying them loose, look for firm green sprouts—you don't want yellow, spotted, or loose leaves.


Prep Steps (from stalk to finish) 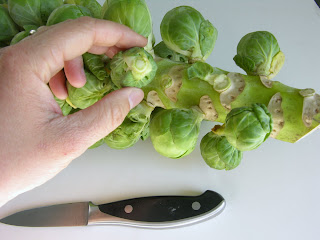 1. Pulling backward, remove each of the spouts—they should just snap off in your hand with a little pressure. Remove any leaves that may be yellow or spotted.


2. Put the Brussels sprouts in a bowl filled with warm water and let them soak for about 10 minutes. This will flush out the dirt and any tiny critters than may be lurking in the folds. I highly recommend not skipping this step. 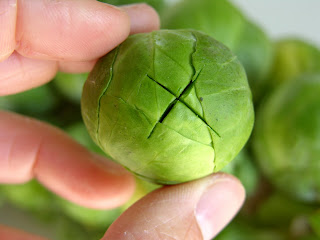 4. This next step is optional, considering the debate surrounding whether it actually aids in the cooking process. Personally, I often do it because that's how I learned to prepare them and I'm a creature of habit.


Take a pairing knife and cut a small X at the top of each Brussels sprout. This will (supposedly) help to ensure a more even and slightly faster cooking time. Does it really make a difference? I honestly couldn't say and it's not keeping me up at night. 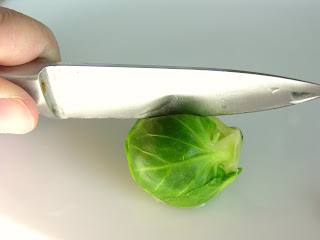 5. Steam (about 8 minutes) or boil (about 6 minutes) the veggies until tender. I prefer steaming to help preserve all the healthy stuff.* 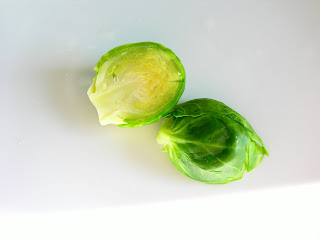 6. Now you can cut off the stem or base of the cooked sprout, and then slice them in half (or in slices, depending on your preference).

about 1 pound of fresh Brussels sprouts
6 cloves of garlic, minced
½ Tbsp olive oil
2/3 cup walnut pieces
½ Tbsp butter
2 oz grated Parmesan or Asiago cheese
salt and black pepper to taste
1. Prepare the Brussels sprouts (as directed above) by cooking until tender and halving. Be careful not to overcook, as this tends to bring out stronger, more unpleasant flavors.

2. In a large frying pan or wok, add the olive oil and cook the garlic for 1-2 minutes, add the walnuts and cook for another minute.

3. Add the Brussels sprouts and butter to the pan and sauté until lightly brown, about five minutes.

4. Either sprinkle the vegetables with grated cheese and serve immediately, or sprinkle with cheese and broil until cheese is melted.

*Eat your Brussels sprouts, they're good for you. They’ve got lots of vitamin C and K, as well as a respectable amount of vitamin A and protein.
Posted by Drinkapotamus at 3:21 PM

Email ThisBlogThis!Share to TwitterShare to FacebookShare to Pinterest
Labels: Good For You, How-to Guide, Much Needed Advice, Recipes, Seasonal, Vegetarian