The Sazerac, The Saints, The Superbowl 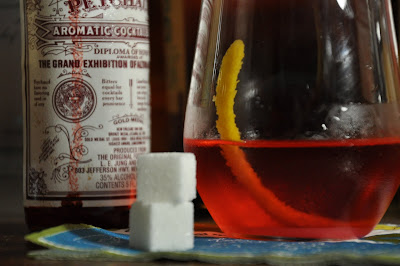 In honor of the Saints finally making it to the Superbowl, this Sunday's beverage of choice will be the Sazerac. Of course I will probably be backing the Colts, but I still want to give the New Orleans crew the props they deserve. The Sazerac, a classic cocktail created in the Big Easy, is one of my favorite drinks. The Sazerac is relatively simple, and its two most defining ingredients, Herbsaint and Peychaud's bitters, are New Orleans traditions.

Herbsaint, an anise flavored liqueur similar to Pernod or Absinthe, was first released in 1934 in New Orleans. It was called Legendre Absinthe at the time, but ― though the recipe never contained wormwood and was not actually absinthe ― the Department of Agriculture had their trousers in a twist and made them change the name so there would not be any confusion. Peychaud's, a bright red gentian based bitters was created by a creole apothecary somewhere around the year 1830. This fellow Peychaud is also said to have had a hand in developing the Sazerac cocktail, which became quite popular in the 1850's. Both products are owned by the New Orleans based company, Sazerac. Speaking of which...

In a single rocks glass (lately I've taken to using a stemless wine glass for my Sazerac) add the Herbsaint and rinse the glass. Discard the extra liqueur. Add the sugar cube (I usually use a half) and add the bitters. Dissolve/crush the sugar with a spoon. Pour the rye into a pint glass filled with ice and stir for 20-30 seconds. Pour into glass (sans ice) and zest the lemon peel into the drink.

*Rye whiskey, not bourbon.
Posted by Drinkapotamus at 7:46 PM