CA Plum Wine and the Cast Away 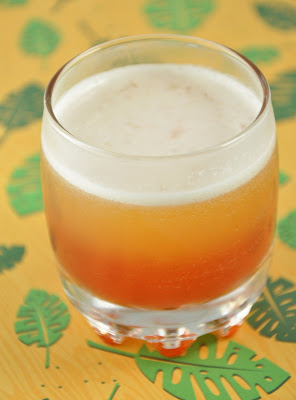 I recently had occasion for a large scale cocktail experiment involving lots of locally produced and distilled wines and spirits. In the end I had a half bottle of plum wine left over, and it’s not something I'd usually buy just for sipping. Plum wine (also called umeshu) is a sweet, almost syrupy drink that’s popular in Japan. It will make you think of cherry and almond, and sometimes, and I mean this in a really good way, cough syrup. You’ll fine a decent number of Sake producers on the West Coast because there are a lot of areas here suitable for growing rice. I happened to be using Gekkeikan (produced in Folsom, CA), but if I had to buy more, I'd probably go with the plum wine from Berkeley's Takara Sake.

As for the drink, I've been on a rum kick lately, and not just because rum is about to be in season. (And before you even ask, whiskey is always in season.) I have also been... let's say, infatuated, with all things Tiki as of late. So naturally, I turned to rum as my base. So I present to you a fruity, sweet (but not too sweet) summertime beverage perfect for your next BBQ. Think you can't use up a whole bottle of plum wine? Think again.

Add the light rum, plum wine, and juices to a shaker filled with ice. Shake like hell. Pour into a punch glass or rocks glass and add a healthy splash of grenadine before serving.

Posted by Drinkapotamus at 4:38 PM