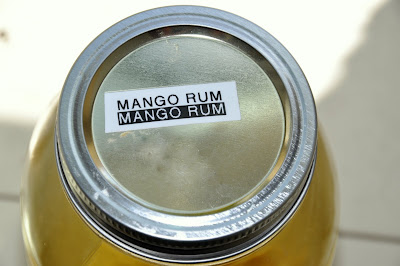 Often the most difficult part of making a fruit infused spirit is watching all that perfectly ripe fruit getting sacrificed to the boozed gods. (Not that it isn't a worthy cause—in the end, the fruit will not go unappreciated.) The feeling of loss is sometimes inevitable, but it doesn't always have to be that way. Over the weekend while slicing some fruit to have with breakfast, I noticed that the mango pit was holding on to quite a bit of flesh. Now normally after I've sliced all the good stuff off, I give the pit a good gnawing on and then compost it. But it just so happens I had an extra grande jug of white rum sitting on the counter, begging to be noticed. I took the pits and plopped them in a mason jar and covered them with the rum. A few days later the waste not, want not rum infusion was ready for consumption. And while it may not look very pretty in the jar, after filtering your infusion you'll have a lovely, golden hued rum to experiment with, or just to sip on its own. 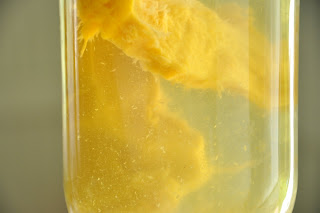 2 medium fleshy mango pits (I used Champagne mangos)
3-4 cups light rum, or as much as it takes to cover the fruit

Place the fruit in a large Mason jar. Cover fruit completely with light rum. I used Cruzan, but if you want to show some love for Haiti, I suppose Barbancourt is okay too. Place the jar in a dark place, or at least out of direct sunlight, and let infuse for at least 3-4 days (I left this last batch in for a week, and I thought it was just right). Shake every other day. If you're not sure if it's ready, taste it. You can always let it set a little longer.

Filter: When you're happy with the infusion, remove the pits, then strain into another container or jar to weed out the little pieces of fruit. And if you really want to be awesome...

After using the mesh strainer to get the little fruit chunkies, you can clean it up even more with a coffee filter and pour over device. Just strain it once more and get rid of those pesky particles. It makes for a more visually appealing infusion.

Posted by Drinkapotamus at 5:35 PM