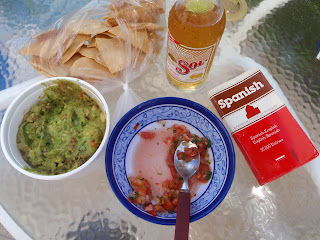 "take-away" snacks from Posada Amor
Here's the part where I really get bummed about that damn camera breaking. I wish I could show you the pastry truck and the corn cart, but alas, our little camera gave up on us. There's some tasty street food to be had in Puerto Morelos. Two things in particular are worth seeking out, and by that I mean ferociously stalking the vendor.

Look for his cart in the late afternoon throughout the evening. He's got corn on the cob, dressed with mayo, lemon juice and cheese. And he's got esquites! It's basically the same deal but it comes in a cup (the corn is cooked in some kind of broth) and it's topped with lemon juice, mayo, cheese, and some other seasoning I can't recall. Deliciousness! 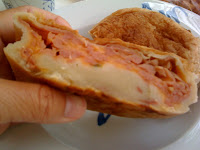 Worth chasing a few blocks, trust me. You can find the pastry truck driving through the square in the evening (around 7:00 is a good time to keep an eye out.) It's a white panel van—the type one might typically want to steer clear of if it circled through some American suburban neighborhood—but this van is filled with tasty Mexican pastries! Flag down the driver and he'll stop to sell you some. They're amazing, and super cheap too.

If you need snacks or you're staying in a place with a kitchen and need groceries, this is the largest market in town. We cooked breakfast in the mornings, so we usually picked up eggs, cheese, and bread/tortillas from Casa Martin. And just to warn those of you unfamiliar with the metric system...if you want to order from the deli counter, get familiar with kilograms. 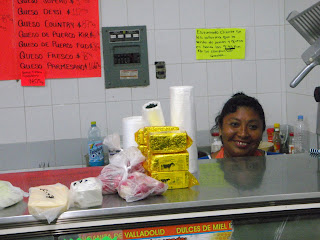 thank you for the cheese!!
I checked in on the wifey who was ordering some cheese: “How much should we get...it's in kilograms” She seemed somewhat on the verge of panic. “Kgs?” I asked. “Yes, Kgs,” she confirmed. I too began to panic. “It's {Kg} got to be something close to a pound, right? Just get like, half a Kg.” Wrong. Apparently 1 Kg = 2.2 lbs. And let me tell you, that's a hell of a lot of queso fresco, even for cheese lovers. Fortunately, the very friendly cheese lady spoke some English, and was nice enough to cut the half Kg into another half for us. She also laughed at us a little. And she was nice enough to let me take her picture before we left. 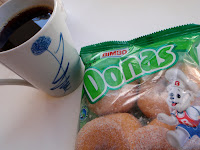 Donas-yes, they are tiny packaged donuts coated in powdered sugar. They're made by a company called Bimbo, something like the Mexican version of Hostess. I'd say we ate a pack about every other day.

Submarinos-kind of like Twinkies, but with more vanilla. They also make them in chocolate, but I think the vanilla ones are the way to go.
Posted by Drinkapotamus at 1:51 PM