How to Make Easy Pizza Dough (best recipe ever) 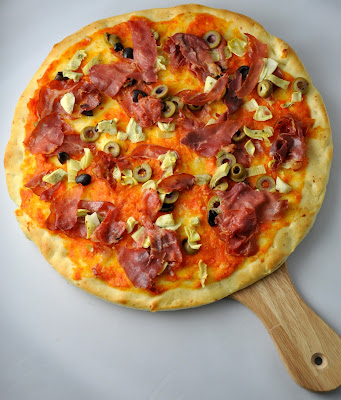 This sounds like a big claim, I know, but it's true. Not only is the dough ridiculously easy to make, handle, and shape, it's also very, very tasty. So much so that we've been eating pizza about four nights a week (sometimes even for breakfast) since we've discovered the joys of easy homemade pizza dough. There is also a lot less guilt involved post-pizza--it's a lot healthier than take out pizza and you can control the amount of toppings and their quality.

1. Put the yeast in a large bowl, add the water which should be lukewarm, and let sit while you measure out the flour.

2. Measure flour into a separate bowl. 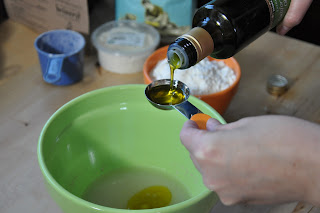 3. Add olive oil, sugar, and salt to the yeasty water, which should look cloudy at this point. Take a wooden spoon and stir the mixture together. While stirring, gradually add the flour until the mixture begins pull away from the bowl and is no longer too sticky to handle. 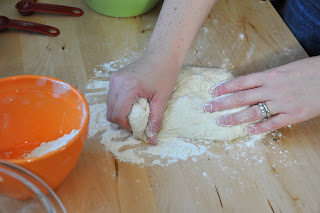 4. Turn the dough out onto a lightly floured surface, then knead in the remaining flour that you were not able to stir in.

5. Transfer dough to a lightly oiled bowl, cover with a dish towel, and let rise for about 1-1.5 hours (preferably in the warmest part of your kitchen).

*When you're ready to use the dough, divide it up depending on the size pan you're using. If you want to save the other half or portion of the dough, place it in a lightly oiled bowl, cover with plastic wrap, and store in the fridge up to two days.

*Get the oven hot!! Preheat the oven to 475-500º and then stretch the dough out on your pizza pan or stone. When the oven is hot enough, bake off the crust for about 5-6 minutes, pull it out and add your toppings, return the pizza and bake for 8-10 more minutes. I often switch the oven to broil for the last minute or two of cooking to brown the cheese.

Posted by Drinkapotamus at 1:42 PM